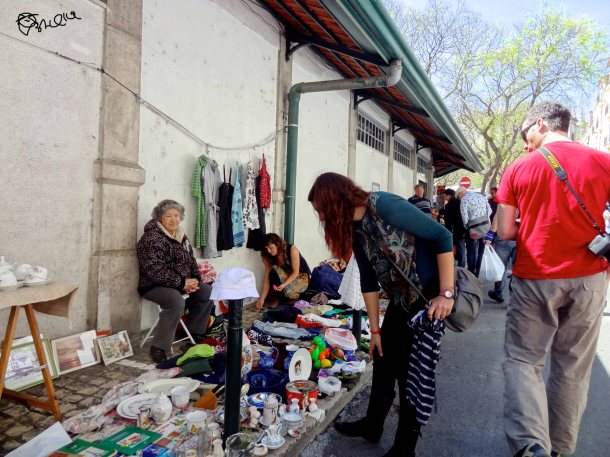 My Portuguese classmates asked me, “Which one do you like the best? Porto or Lisbon?” First time I heard that question was before my visit to Lisbon. They said that in Portugal there are two capitals. Lisbon as the capital of the southern Portugal and Portugal itself. Porto as the capital of the northern Portugal. They told me also that the one who loves Porto usually doesn’t like Lisbon, and vice versa. Each city also has its football team, Lisbon with Benfica and Porto with FC Porto (my little brother is a fan of FC Porto!) Even for beer market segmentation: Super Bock is more for the north and Sagres is more for the South.

I have visited Lisbon twice, one for “holiday” and one for watching a concert. My first visit was with my two Indonesian friends and we stayed in Bu Nunik’s place. Bu Nunik works for Indonesian embassy in Portugal. She has a good housekeeper named Mbak Diah who cooks really well. So, during my first visit there, I didn’t try a Portuguese-Lisbon meal because I couldn’t resist Mbak Diah’s cookings. OMG! Truly Indonesian taste. In contrast, on my second visit, I went there with my Portuguese friend, Ana, and we tried made-from-fresh-fish cookings in a (modern) Peixaria named SEA ME. Peixaria itself stands for a place that sells fishes and friends. SEA ME’s concept is really interesting, they do not only sell fishes, but also offer a cozy restaurant. Food’s price in Lisbon is (of course) more expensive than Porto’s. Lisbon is a capital city! But it offers many variants of food, from a simple restaurant or cafe, until a luxurious one. 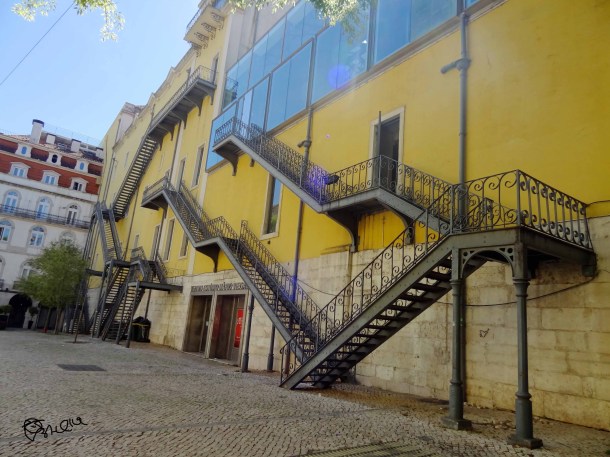 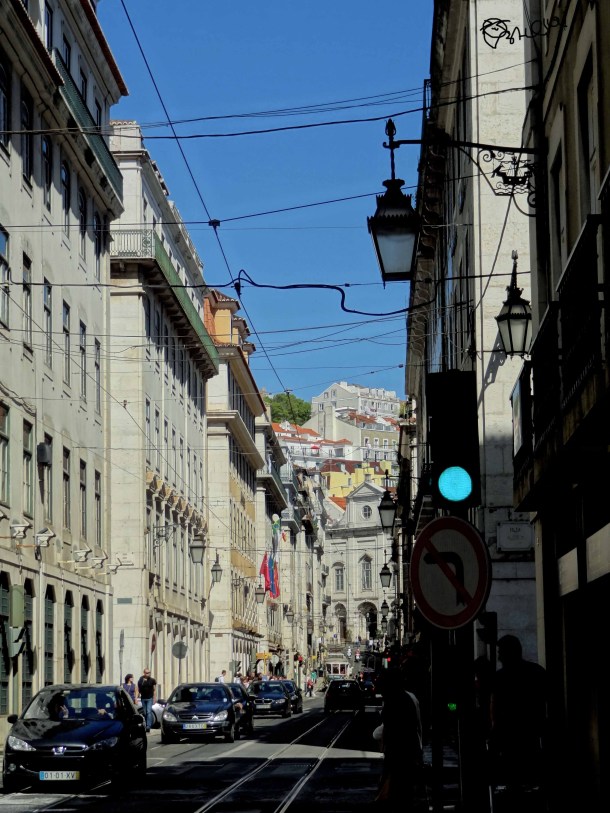 Lisbon: On the Way to Castle 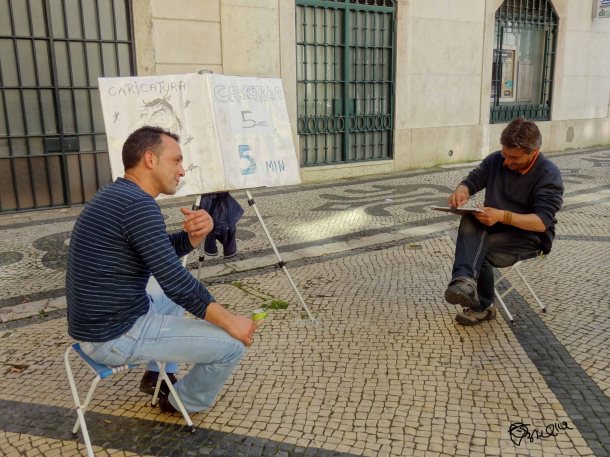 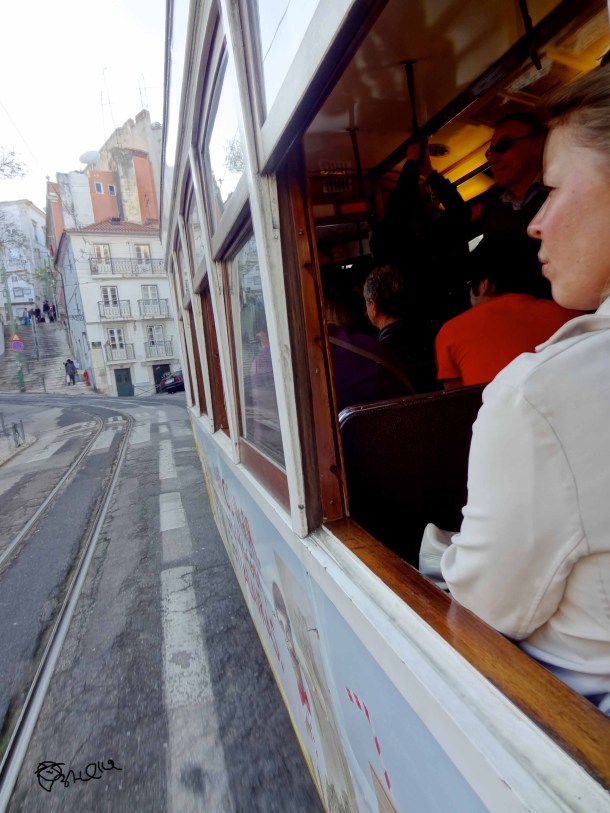 Lisbon: Looking from the famous Tram 28 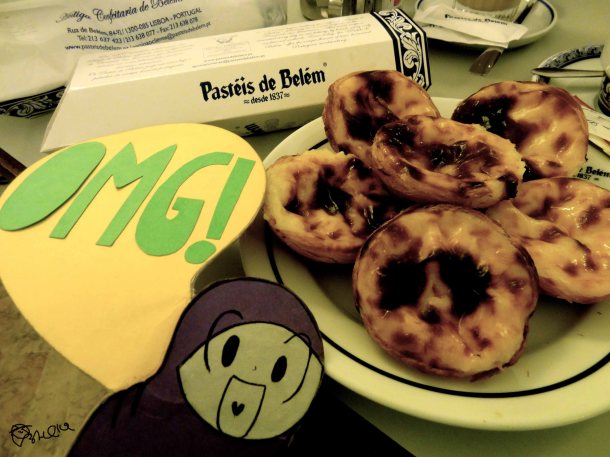 OMG! I was in Lisbon and eating Pasteis de Belem

Most of old and antique buildings in Lisbon are very big. Unlike in Porto, they are located almost in every corner of the city. In Porto, those big old and antique buildings with magnificent architecture can be found mostly in the downtown area. At my first visit, I spent most of the time wandering around Lisbon’s Thieves Market (I will make a post about it later), Oriente area, Chiado area, and an area near the Saõ Jorge castle. I didn’t wander a lot in Belem because me & my friends were too busy enjoying Pasteis de Belem. Then at my second visit there, I stopped in Rato metro station and then walked from there to The Independente Hostel (OMG! I strongly recommend this hostel. I love it!). Ana told me that this area has many nice concept stores and yes, I agreed with her. Unluckily, it was on Sunday and those stores were closed. Surprisingly, I could reach Chiado or Baixa area by walking down from that hostel. Belem area was also nice. There was a flea market on Sunday and I love flea market! I enjoyed that time wandering around Belem and walking from Belem garden to Torre de Belem where the concert was held. Unfortunately, that Sunday afternoon, Pasteis de Belem’s queue was mega long so I didn’t eat that one on my second visit 😦 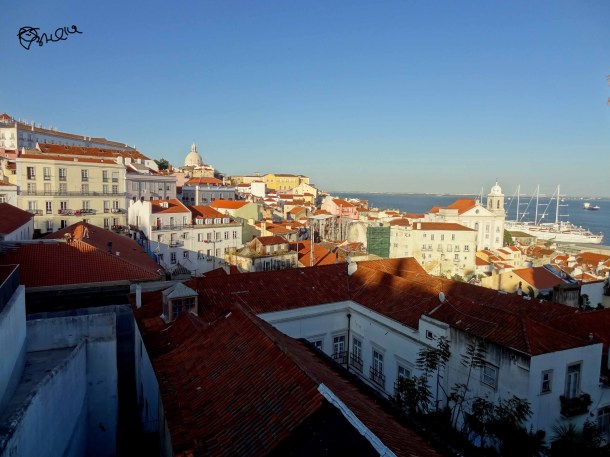 Lisbon from the Top 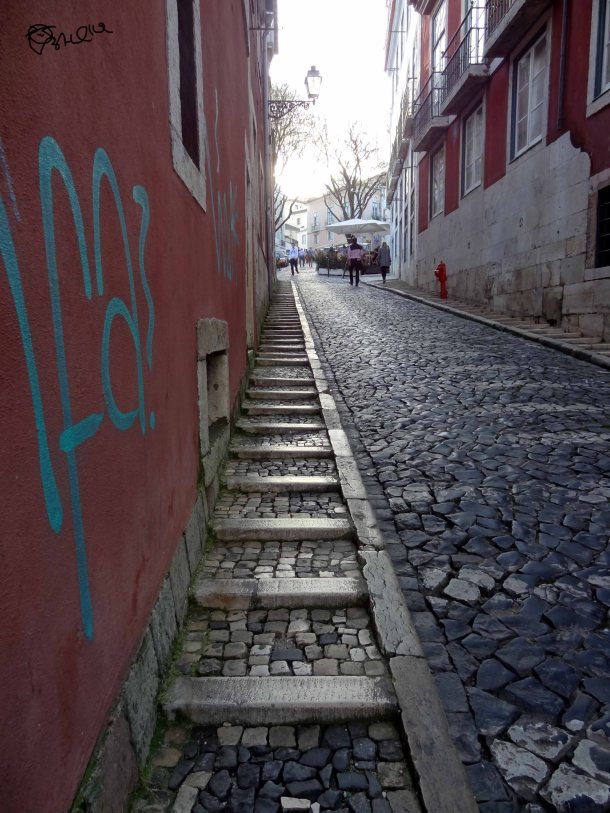 Lisbon: Stairs (again). I love this kind of Stairs and there are many in Lisbon. 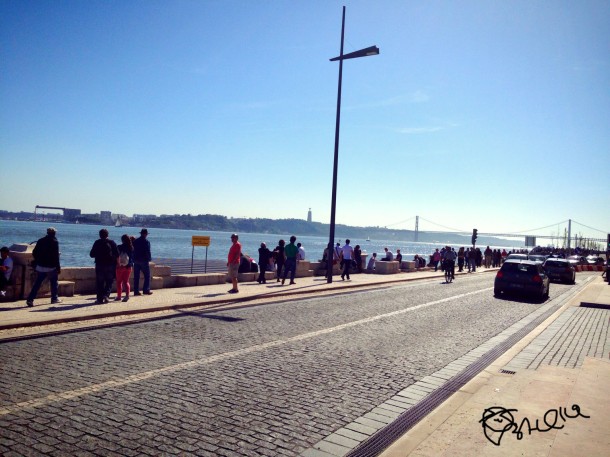 Lisbon: It was soooo sunny!

Every bus from/to Porto stops at Oriente Station. I went out from that station and surprisingly, Oriente area was incredibly similar with Sudirman-Thamrin area in Jakarta. Both are busy district with many high office buildings and office workers walk with their sophisticated outfits (and attitude!). Suddenly, I missed Jakarta. There was also a nice garden near the beach behind those high buildings. While waiting for my friend, I sat down on a bench and looked at those people walking around (it was lunch break for office workers) or looking at Vasco da Gama bridge, the second longest bridge in Europe. Of course, I cannot do this in Sudirman-Thamrin, Jakarta. I will be died of traffic pollution by doing that.

Lisbon reminds me a lot of Jakarta, the capital city of Indonesia. Lisbon is Jakarta with less traffic. It’s big and complete! I mean, you can find many things here. If you want to eat in a fancy and super luxurious restaurant, you can find it. If you want to shop those branded items, you can find it here also. I enjoy big city, but only for short visit. In the meantime, Porto reminds me of Bandung, the city where I studied for my undergraduate study. It’s not that big but cozy! I cannot answer that question: which one do I like the best. I enjoyed my visits to Lisbon and I am planning to visit Lisbon again. There are some spots that I haven’t visited (especially, some nice restaurants and concept stores that caught my eye when I walked). But, for a living and studying life, I prefer Porto to Lisbon.