Some of you might think that I decided to visit Iceland because of the gross selling hit movie called The Secret Life of Walter Mitty starring Ben Stiller. In fact, the reasons behind were more than that.

I first heard about the country and its capital city, Reykjavik, when my teacher (he is from France, fyi) in Conversation class gave us a discussion topic about the Olympic games. My group got the challenge to convince others to choose Reykjavik for the next Olympic. At that time we weren’t aware of the country, of course. It is far far away from Indonesia.

Then few months after, I went to study in Porto and I met this awesome friend of mine, Thiago Sobral (he is from Brazil), who has this obsession for Iceland. He talked almost everyday about Iceland until Birna, my friend from Iceland, said Thiago knows Iceland better than her. LOL. When Thiago first told me and showed me on the map about Iceland, its name rang a bell. But I wasn’t that curious about it until I met Birna.

I met Birna in a Portuguese class. I still remember when she brought THE rotten shark and a special alcohol drink to our class and asked us to try. Birna often shared stories about her country and of course, the foods that she missed. I always wondered why Birna only wore a wool cape during winter in Porto while I always put many layers on :p then I knew the answer after I came to Iceland.

At that time, i was in doubt between Iceland and Norway for my next trip. I have limited budget… and time. I made itinerary for both, I compared expenses for both, and checked the possible return flights from Portugal (my thesis hadn’t finished at that time). But then I thought: I didn’t have a proper goodbye to Birna when she left Porto. And while I was having that thought, Thiago recommended me to watch Walter Mitty and I did it. The next morning after I watched the movie, I made my decision: I was going to Iceland then I booked my flights right away!

Birna and her family picked me up at Keflavik airport (KEF) with Johanna , her daughter, carrying a draw saying “Welcome, Ms. OMG!”. OOOH, SO SWEET :”> KEF airport is the only International airport in Iceland and is 40′ away from Reykjavik. But no worry, there is a flybus service that connects you to Reykjavik city center or even to the famous Blue Lagoon ( Blue Lagoon is located between KEF and Reykjavik).

“Do you believe that now you are in Iceland?” asked Birna. I paused for a second then I shouted, “OMG! I am in Iceland!!!!”

Birna and Siggi (her husband) let me sit at the front seat to see Iceland better. My first impression was… there was barely any tree during our way to Reykjavik. The main road was almost empty with a rare sight of cars. Unlikely in Indonesia, no? Haha. 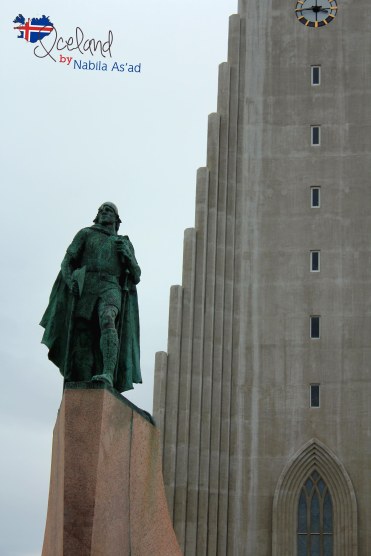 The first city I knew in Iceland was of course its capital, Reykjavik. When I defined my itinerary in Iceland, I struggled with the name of cities in Iceland. All names sounded unfamiliar for me. Luckily, I have Birna who had been helping me (and even on the last minute, she made my itineraries in Iceland!). I was planning to have a road trip with an Italian guy and we were planning to rent a car and looked for other two travellers to join us. But.. two weeks before the trip, he suddenly cancelled our plan & route! 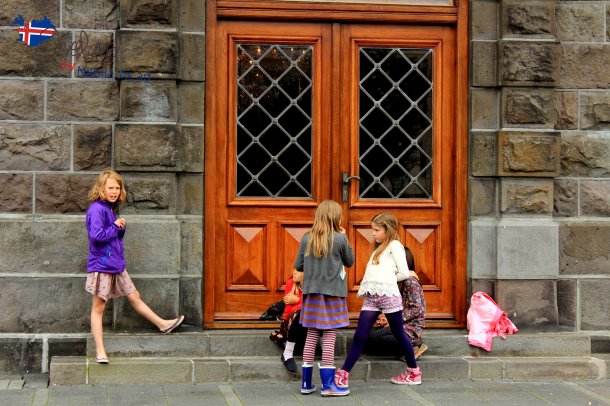 Girls playing in front of the city hall

I took a bus to go to the city center. The bus stopped at a station named Hlemmur then I took a walk to Hallgrímskirkja church. You can see the top of this church from any point of view in greater Reykjavik. What was quite funny from the bus system in Iceland is its payment system. You have to buy 1cm x 2cm bus tickets at nearby station or pay with exact amount of 350 ISK per trip. The bus driver doesn’t provide any change, haha! Once i only had 200 ISK so I put my cute cat face to the driver and yeay it worked!!! He let me in :p

Instead of walking on the direction to the church, I walk the opposite way to the sea. There I saw the mountain Esja. I have to say that mountains in Iceland that I found were not as high as mountains in Indonesia. Mountain Esja makes a stunning background for Reykjavik. I mean, it was the first capital where I could see a mountain nearby and I could breathe…fresh air! (tho the other parts of Iceland have better air. But I come from Indonesia, where polution is everywhere, hehe).

The road side was very very calm. I barely saw any people passing by so I got this freedom to take video selfie as loud as I wanted. I follow the path and that path took me to Solfar (Sun Voyager) Sculpture -pictured above and next to this sculpture was the famous Harpa concert hall. It took me only 5 minutes walking!

Seeing the harbor from Harpa

Reykjavik city center was… full of tourist shops and tourist, of course. There was a main road starts from the main tourist information office and walk all the way up to Hallgrímskirkja.

You will see the typical Icelandic sweater made from wool sold everywhere. Birna gave me an Icelandic sweater and that sweater saved this tropical girl from the zupper breeeezy “summer” in Iceland. It was really warm and comfortable. Takk, Birna 😉

Taking picture with the trolls

Tho I mentioned previously that it was full of tourist, the other part of city center was..quite calm, IMO. I sent pictures I took in Reykjavik to my father and all he said was, “are you in a village?” considering how calm the city was. The total population in Iceland is 323.000 (2013-based on the World Bank) and 60% of population live in Reykjavik so you can imagine how are the other cities. The population in my hometown (Surakarta) is even higher that the whole population in Iceland! I only saw Reykjavik became completely full of people was during the gay pride parade on my first Saturday. Buses were full and it was hard to walk. That saturday the sun was shining and people were going out either watching the parade, sunbathing while watching the gay pride concert, or just enjoying the city or coming to flea market (there is one famous flea market near the harbor and it is definitely a must!). A puuurfect saturday!

The best noodle restaurant in town!!!

Unlikely other European cities in the EU where I found many immigrants from China, there were more immigrants from the Philippines and Thailand in Iceland. Most of them were women who got married to Icelanders. I met several men on the street and I thought they were Malaysian or Indonesian. I talked in Bahasa Indonesia to them and their reaction was like..WHAAAAT?!!!

Baby and Trolley Outside

The strangest things I found in Reykjavik were the trolleys and babies outside some restaurants. Birna told me that Icelanders prefer to leave their baby inside a trolley outside the restaurant while they are eating. This to prevent the baby crying and not to wake baby up from his sleep. Birna also said that one Icelander woman did that in the States but then police arrested her for being an irresponsible parent. Ha! I wouldn’t dare doing this in Indonesia (of courseeee!) but here in Iceland: everything is so peaceful. and safe. During my travel, I barely paid attention to my belongings. I left my phone and camera charged in the kitchen while I slept in my tent and no one stole my stuffs! I also left my stuffs outside a museum in Husavik, Northeast Iceland, and nothing was stolen. 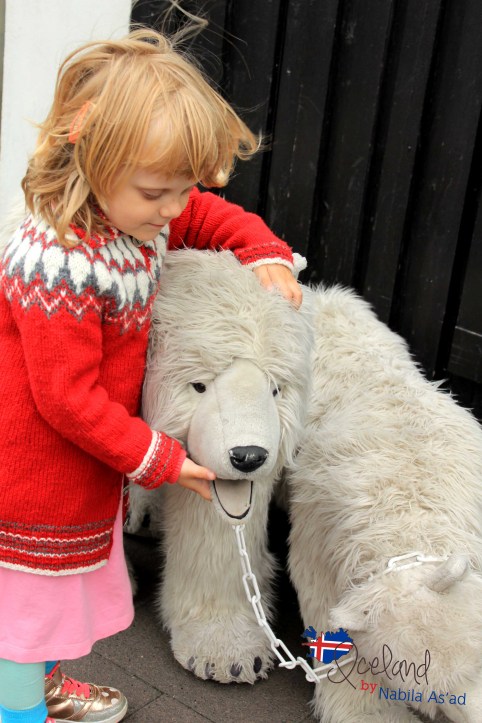 Reykjavik is the farthest north capital I have ever been in my whole life! As Iceland now becomes the most unforgettable country I have ever visited until now, Reykjavik also left a deep impression for me and all thanks to the Icelanders living there. My story in Iceland hasn’t finished yet until here. As you know: Nabila, please stop talking about Iceland!!! So if you ever meet me someday, poke me! Ask me, “how was Iceland?” and you have to brace yourself that I cannot stop…talking about Iceland. I just…can’t!

See you in the next part where of course, I will share about the road trip!

Kisses from a small girl from Surakarta, Indonesia, who still cannot believe that she has stepped her feet on Iceland,