Here are the local cuisines those have been the locals’ favorite of all time:

OK! This food is the main reason why being a vegan is the hardest decision ever. Whoever loves to eat lamb should try Tengkleng Kambing. Trust me, finding stalls those sell Tengkleng Kambing in Solo is easier than finding a needle in a haystack. Tengkleng is kind of a soup consists of innards or known as jeroan and bones (PS. Don’t worry, you may ask for ribs as well). It may look a bit like gulai kambing but with a lighter broth. Nabila’s favorite is the Tengkleng Sumsum Kambing. While you are at the Tengkleng stall, make sure to order Sate Buntel and Sate Kambing to have a lamb party to the fullest.

The list of the best Tengkleng Kambing stall can be found here.

PS. Do ask the waiter to serve you the re-cooked Tengkleng, tengkleng will be re-cooked with sweet soy sauce and pepper.

Sego liwet or mostly called as Go-liwet by the Solonese is one of the most famous local foods. Nabila should admit that she always been disappointed whenever she ordered Nasi Liwet Solo in a city other than Solo. The Solonese Sego Liwet is different than Sundanese Liwet. The main difference is the yellow-ish chicken and look-spicy-but-it-is-not chayote soup as the main dishes and how they cook the rice.

Taste it and you’ll know immediately. Nabila’s favorite is a simple Sego Liwet stall that opens early morning in front of SMP Al Islam 1 Solo (click here for the coordinate on Google Maps). Please come before 8AM otherwise you’ll miss it. But no worry, Sego Liwet is usually eaten at night as well. There are some Sego Liwet stalls in Keprabon area (in front of Keraton Mangkunegaran) or along the Dr. Radjiman Laweyan road. 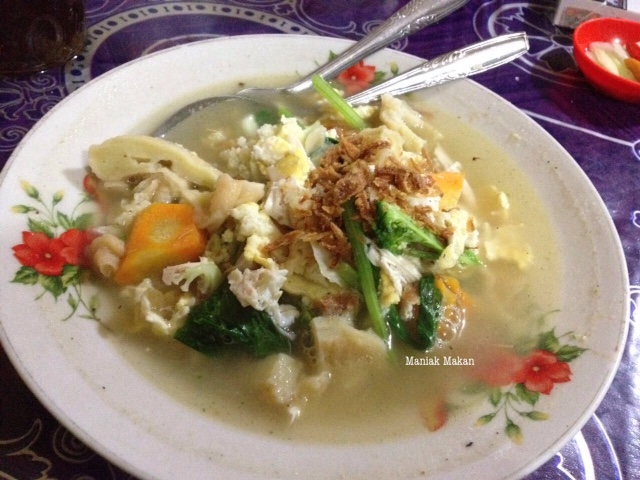 This one is Bapak Asngad’s favorite food! The original Bakmi Djowo takes quite a time to cook because it is cooked on a charcoal stove. Therefore, prepare yourself if you have to wait a few minutes and more if there is more lines in the queue. Each Solonese has their own favorite Bakmi Djowo. Nabila family’s one is Bakmi Jawa Padmosari (click here for coordinate on GMaps). Here is another review of Bakmi Jawa Padmosari.

Bakmi thoprak might sound weird because  its name doesn’t resemble the food. It is a noodle soup with additional side dishes as sosis solo, meat, friend tempeh, and peanuts. It is served hot and eaten during lunch in a hot sunny day in Solo (around 27C at noon). The most famous one is Bakmi Thoprak Yu Nani while Nabila often visited Bakmi Thoprak Mbak Sri. So, you decide which one you would like to visit. 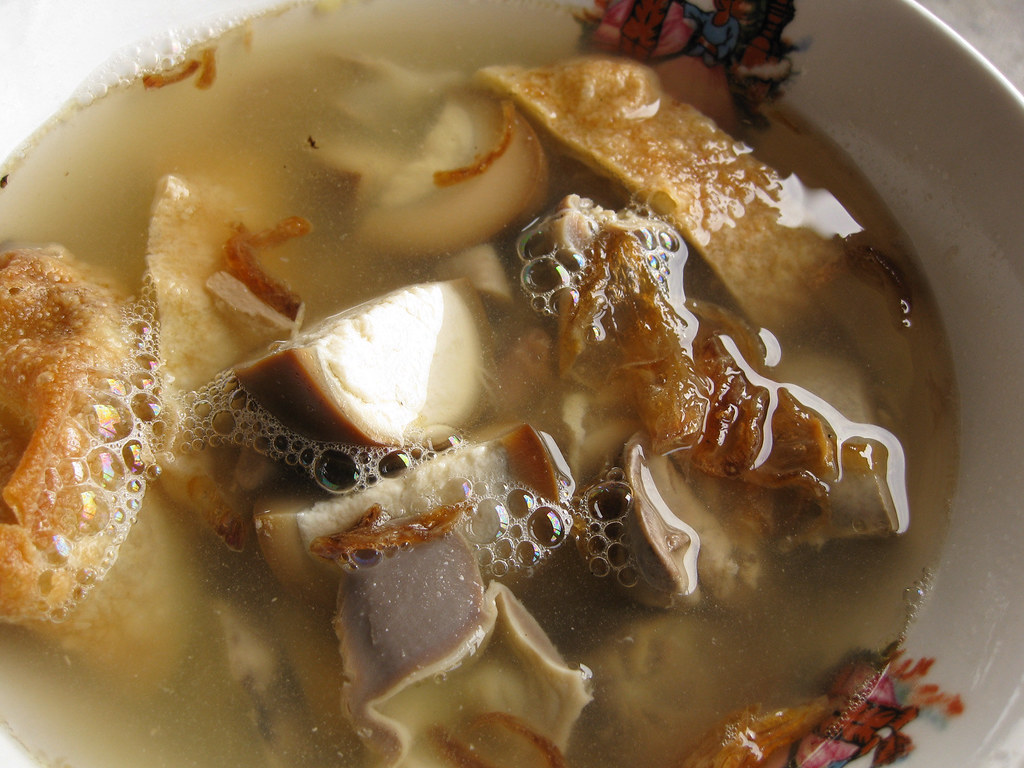 When you are visiting Pasar Gede (and you must visit Pasar Gede at noon), please ask any local you meet to tell you where Timlo Sastro is. For a hygienic person, Timlo Sastro’s place won’t look that pleasing because it is located near a laystall or TPS behind Pasar Gede. Then he/she might prefer to eat Timlo Maestro at night. A complete bowl of Timlo soup consists of Sosis Solo, Egg, sliced chicken, and chicken liver & gizzard. If you don’t like innards, you can ask for the egg bowl one.

Lekker is originally a Dutch word for delicious. But the lekker we are talking about here is an Indonesian version of crepe. The crepe itself is cooked on a charcoal stove and filled with banana and/or chocolate. The best lekker we have here in Solo is Lekker Gajahan. Its name “Gajahan” comes from the Gajahan area where its original stall is located. Lekker Gajahan comes with a higher price compared to other lekker, but it has more amount of banana and chocolate. and you also can order it with additional cheese filling!

Selat is an Solonese twist of steak and salad. Like an usual steak, selat consists of boiled veggies, potato or sweet potato as carbs, and meat. There are many variants of meat used in Selat, the common ones are galantine and beef. Galantine itself is adapted from the famous French cuisine. The most famous restaurants for Selat Solo are Selat VIEN and Selat Mbak Lies. While Nabila family’s prefer the one at Selat Solo Tenda Biru because the restaurant offers plenty options of Solo locals cuisines.

Nabila remembered clearly how she felt when she ordered pecel lele in Bandung and what she got was a plate of fried lele and lalapan (raw veggies). That was because what the Solonese call as pecel was a plate of boiled veggies poured with peanut sauce. Sego Pecel is a typical local food and eaten during breakfast here in Solo. Nabila family’s favourite sego pecel are one in Pecel Bu Kis, behind the city’s court, and Pecel Menangan in Pasar Kliwon. Please do not come late because most likely, the restaurants run out of pecel after 9 AM.

Ox tongue maybe not as popular as the ox tail soup, but yet it is Nabila’s favorite kind of cooking. The ox tongue is cooked almost similar with meat in Selat Solo and usually it is also served with veggies and salad. Usually it is sold at stalls who sell Bakmi Jowo.

What is so unique about Garang Asem is that: everytime I asked my Solonese friend which garang asem they like the best? They always answered that their mom’s cooking is the best one they have ever tried. Garang Asem is a cooked chicked wrapped and boiled together with the banana leaf.

Since I dont have any recommendation for a Garang Asem restaurant, I could only suggest you to taste it at my wedding!